Until React 17, the useEffect cleanup mechanism used to run during commit phase. This implies that when a component is unmounting, React would execute the cleanup functions and then update the screen. It is similar to the behavior of componentWillUnmount in classes.

This is not ideal for larger apps because it slows down large screen transitions (e.g., switching tabs).

Let’s check out a simple example of showing and hiding the fetched users. When we click on the Show users button, it fetches the users through API and displays the user list. On clicking on Hide users, the UserInfo component unmounts.

We will be using the Profiler API to measure how the React application renders.

Let’s go through some terms used in Profiler API.

phase(“mount” or “update”): - Identifies whether the component mounted for the first time or is updated.

Before the changes in React 17, we can see that the cleanup function gets executed and, then the screen gets updated which thereby increases the commit time. 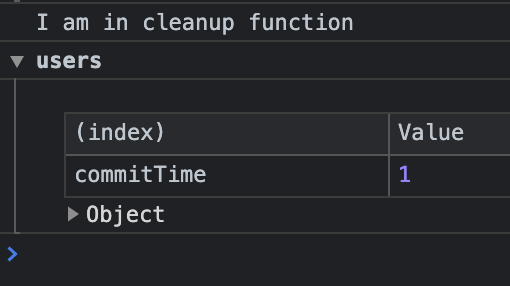 With the changes in React 17, the cleanup function run asynchronously, after the screen gets updated which decreases the commit time.

This change in behavior for cleanup functions has accidentally fixed some issues. One of the issues related to the focus event has been fixed.

React specifically checks for this case and does not fire setState warnings in the short gap between unmounting and the cleanup. So code canceling requests or intervals can almost always stay the same.

Check out the pull request to learn more.

Understanding the difference between React useEffect and useLayoutEffect hooks