Know how to rollout and rollback deployments in Kubernetes

We often come across situations where app deployment to Production fails due to some breaking change. At this point, we have two options - either revert or fix it. Generally, we go for revert. In order to revert, we have to revert a code from production, wait for the CI to complete, and create the deployment again. And, this entire process usually takes us a while, leading to a disruption in app functioning, followed by significant monetary loss.

To handle these risks associated with the deployments, we need to have definite strategies to handle them, for example.

There are mainly two strategies when it comes to deploying apps into production with zero downtime:- 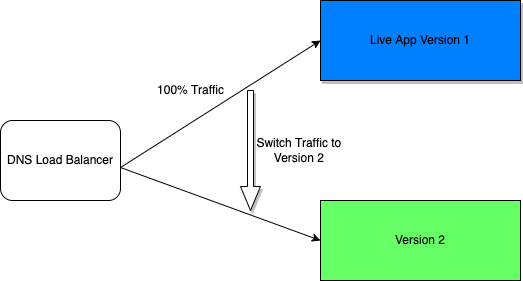 Kubernetes accommodates all the above-mentioned deployment strategies. We will look into the Rolling Updates because it guarantees a safe rollout while keeping the ability to revert, if necessary. Rolling Updates also have first-class support in Kubernetes that allow us to phase in a new version gradually.

In Kubernetes, rolling updates are the default strategy to update the running version of our app. So, Kubernetes runs a cluster of nodes, and each node consists of pods. The rolling update cycles the previous Pod out and brings the newer Pod in incrementally.

This is how rolling updates work.

This is our Kubernetes deployment file which specifies replica as 3 for demo-app and the container image is pointing to AWS ECR.

Now when we run

This will create the deployment with 3 pods running and we can see the status as running.

Now, if we need to update the deployment or need to push the new version out, assuming CI has already pushed the new image to ECR, we can just copy and update the image URL.

The output is similar to:

We can also add the description to the update, so we would know what has changed.

We can always check the status of the rolling update.

The output is similar to:

We can see here that 2 out of 3 new pods are created and the old 2 pods are decommissioned. And, once all the pods are replaced, it shows a success message.

And finally, running get pods should now show only the new Pods:

A rolling update offers a way to gradually deploy the new version of our application across the cluster. It replaces the pods during several phases. For example, we may replace 25% of the pods during the first phase, then another 25% during the next, and so on, until all are upgraded. Since the pods are not replaced all at once, this means that both versions will be live, at least for a short time, during the rollout.

So, we can achieve zero-downtime deployment using Kubernetes and we can deploy as many times as we want and our users will not be able to notice the difference.

However, even if we use Rolling updates, there is still a risk that our application will not work the way we expect it at the end of the deployment and in such a case, we need a rollback.

Rolling back a deployment

Sometimes, due to a breaking change, we may want to rollback a Deployment and Kubernetes By default maintain Deployment’s rollout history so that we can rollback anytime we want.

Suppose, we pushed a breaking change to production and tried deploying it

We can verify the rollout status:

Looking at the Pods created, we can see that all the Pods are stuck.

kubectl get pods The output is similar to this:

And in this case, we need to rollback the deployment to a stable version. To rollback, we need to check the rollout history.

It can be seen, that it shows revisions with change cause which we had added after updating the deployment, and in our case REVISION, 2 was stable.

We can rollback to a specific version by specifying it with --to-revision:

Check if the rollback was successful and the Deployment is running as expected, run:

We can check the status of pods as well.

The Ultimate Guide to Gemfile and Gemfile.lock

How to Use Enums in Rails